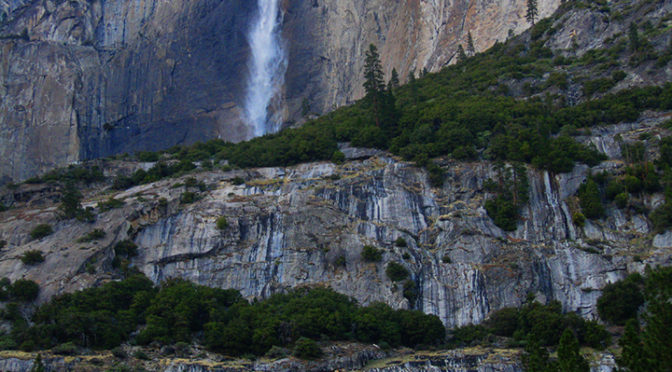 Lessons are better taught through real life experiences. I’ve always preached to my son to not panic in the midst of crisis, a lesson learned from scuba diving. Once you panic you lose all logic and one minor crisis can become a dangerous situation.

After a full day exploring Yosemite, watching mule deer a bit closer than we would have liked and exploring the rocks around the lower falls, our only disappointment was not being able to walk the six hour round trip hike to the upper falls.

It was time to get on the road for Inyo National Forest, to a cabin in the high sierras. We had no service and tried navigating with a map but the mountain roads were confusing. More time had passed and now I was getting more uncomfortable as the light was getting dim and the snow deep.

As we continued getting more lost, signs became less common and our stress level grew higher. We were both beginning to snap at each with the increasing fatigue. We were tired and frustrated.

Suddenly to bring the tension to a pinnacle; 2 deer in the headlights. They came out of nowhere, I veered to the left and they veered to the right. A rare moment when man and nature cooperates but I realized it was time to stop and regroup.

We decided to find the nearest town and after getting phone service and finding the charger for his dead phone we would eat and organize our thoughts. I was doing as I had always preached, instead of reacting and continuing to get more tense, we slowed down and methodically made good decisions that would make a bad situation better.

We ate really good pizza in a small restraunt, had coffee for the long night ahead and got a grasp on the situation. Because of the closed passes we would have to drive six hours to get to where we needed to go, around a mountain range and through a state forest.

I made the best decision I could have made-find the nearest hotel, relax, eat and get a good night sleep. So I paid for a cabin six hours away and a hotel in Groveland but it was so worth it. We ended up experiencing a wonderful night sleep in a circa 1800 gold rush hotel and enjoyed a wonderful breakfast. We lived to drive another day.

Several things we learned on our trip through Yosemite: don’t take passes for granted-they close during the winter months. Be flexible and have a secondary plan, If your going to nearly hit deer make sure they are cooperative deer that don’t panic and the biggest rule of all don’t panic.