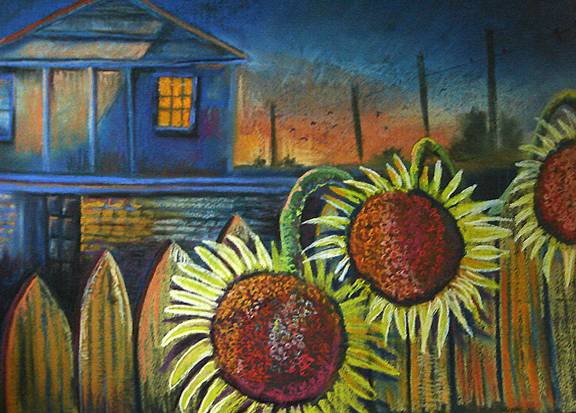 This is a large pastel inspired by the image of a single light illuminating an upstairs room at a nearby townhouse in Rowlett-actually the scene was pretty much unchanged only simplified.
I felt a feeling of haunting when I first saw it. I wanted the viewer to question the scene-who’s in the room?-there is a mystery about a window in the darkness. The sunflowers brings your attention in and lead your eye along the fence.
Sometimes images create themselves and all the artist does is capture what they see-parts of the scene are simplified or exaggerated for the effect and to control the eye of the viewer and how they perceive the scene.
What is obvious to the artist is not always what the viewer will see-they make their own impression from the image and hopefully a hint of what the artist inspiration remains in the final rendering.
Below is the second in the series, again a very large pastel. Each of these include plants that are my favorites in the garden, the sunflower and the passionvine-each are symbolic in their own right and although I don’t often paint flowers, the ones I choose tend to be significant to me-either I have them in my wildlife garden or they have a symbolic meaning to them.
The passionvine represents Christ, although there is nothing specifically religious about the bottom painting, I like the passionvine for its uniqueness and symbolism.
I still feel like both of these will probably be revamped as paintings. My initial image of the bottom pastel was originally darker and the passionvines stood out larger and more vibrant. I kind of got lost in the clouds, I will paint probably a smaller version of it with larger flowers, a less awkward smaller house and a late evening time frame. 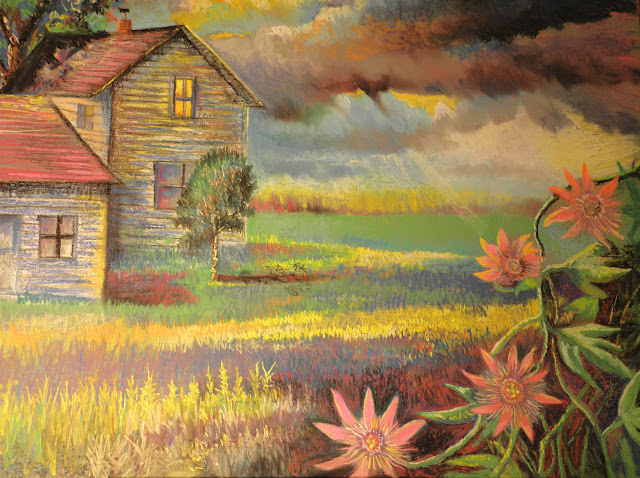 The following images are more sunflower paintings that have been created since this initial group of paintings.

Here are some photographs of the sunflowers, both in my garden and on the road.